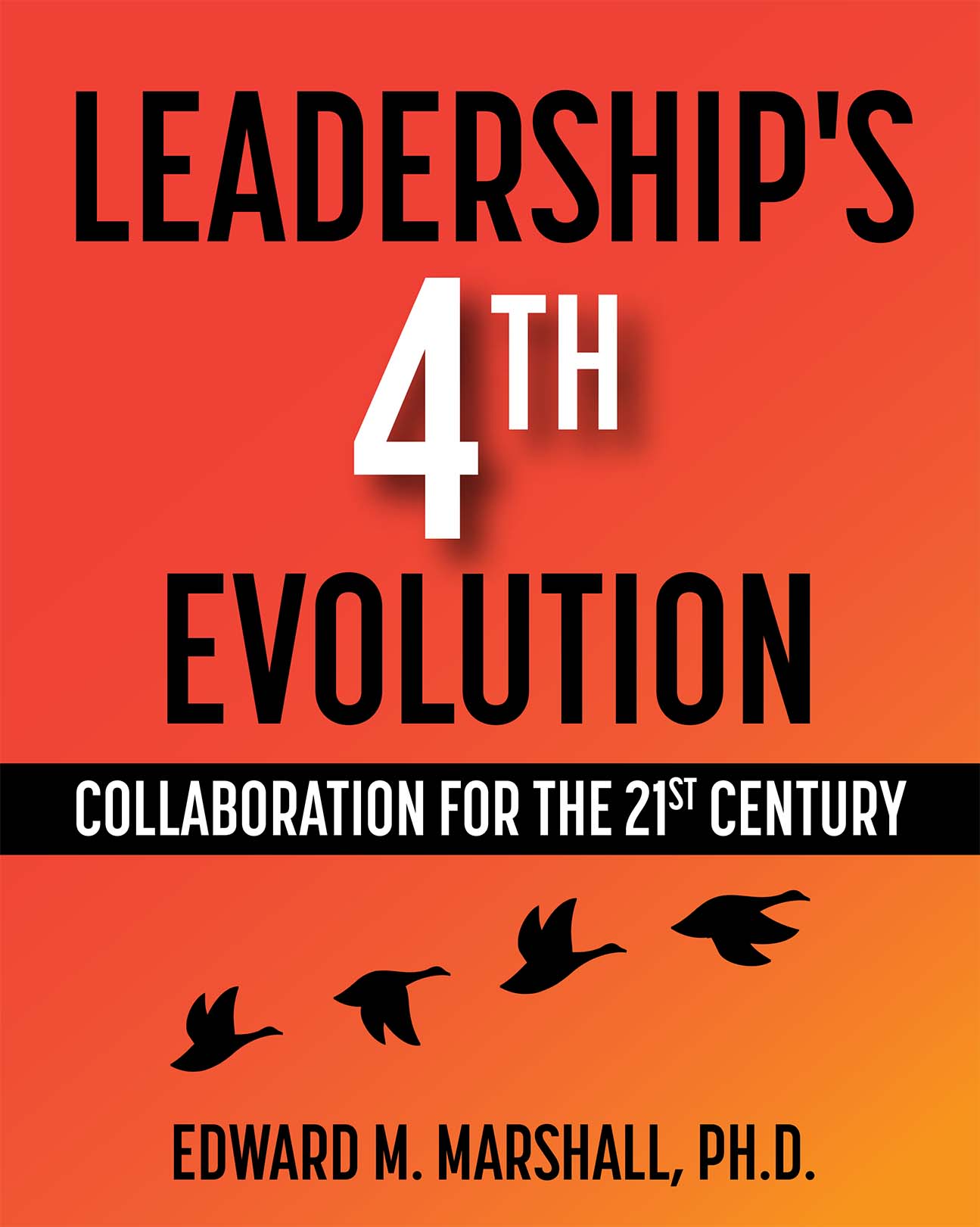 The 21st Century Digital Age presents students and organizational leaders of today and tomorrow with a complex set of professional challenges: market volatility, economic and employment uncertainty, inequality, accelerated technology, a diverse Millennial/GenZ workforce, and existential threats from pandemics and climate change to mass migrations and famine. The predominant leadership paradigm, however, is still 20th Century Industrial Age hierarchy, the Power Paradigm, which is a compliance-oriented approach based on power and control. This approach is the assumed approach to leadership for many graduate schools, and is the predominant way most organizations are still led, even though our 21st Century realities require a new paradigm.

The new paradigm is Collaboration, leadership’s 4th Evolution, which is a principle-based approach to building trust, ownership, and psychological safety that empowers current and future leaders in business administration to transform leadership cultures so that they can meet critical 21st Century challenges. As a practical methodology, it provides award-winning and proven tools and processes for individual leaders, collaborative teams, and organizations that will empower them to create workplaces where people can be their best selves and do their best work so they can produce superior results.

Leadership’s 4th Evolution: Collaboration for the 21st Century is grounded in the preeminent work of giants in the leadership field: Douglas McGregor’s Human Side of Enterprise (1960), Edgar Schein’s Organizational Leadership and Culture (1985), Stephen Covey’s Principle-Centered Leadership (1990) and James Kouzes and Barry Posner’s Leadership Challenge (2007, 2017), among others.

By the early 21st Century, the 4th Evolution, Collaboration, came to fruition after 30 years of work with over a thousand managers in more than 100 projects that addressed critical business challenges, from the strategic alliance between Marriott International and Host Marriott, to IT transformations at Microsoft and VMware, to DuPont’s Information Systems organizational transformation in the Gulf Coast of Texas. In each case, collaborative teams of business leaders learned how to build high levels of trust, which accelerated their ability to achieve breakthrough results. We learned that collaboration is how people naturally want to work, that “We” is more important than “I,” collective action is more effective than rugged individualism, and almost any problem can be solved if we work collaboratively with each other.

Work gets done through people. It is leadership’s responsibility to engage, motivate, empower, and inspire them so that they can be their best selves and do their best work. Leadership’s 4th Evolution: Collaboration for the 21st Century equips students and leaders with a principle-based methodology that achieves that goal. Collaborative leadership recognizes people want to be trusted, respected, engaged, and appreciated. Based on four decades of applied research and consulting work with Fortune 500 leaders and companies on five continents, this book provides a comprehensive theory of collaboration, as well as proven collaborative processes and tools that empower leaders, teams, and organizations to create collaborative leadership cultures.

Value for Students and Leaders

Leadership’s 4th Evolution provides students as well as business leaders a new theory of collaboration and a comprehensive handbook of award-winning collaborative leadership practices at the individual, team, and organizational levels that will help them prepare for the challenges and opportunities they will face in  21st Century workplace. As the world grapples with the realities of COVID-19 and climate change, the leaders of today and tomorrow will find that how we work with others, how we lead, and where we work are being redefined. The processes involved in securing a job, continuing one’s education, and working with colleagues toward a common goal are increasingly dependent upon collaboration.

In order for business administration students and leaders to meet these unique challenges, they will find that Leadership’s 4th Evolution allows them to: 1) ground their professional journeys in their core values, mission, vision, and ethics; 2) build trusting team-based relationships and refine their people skills; 3) navigate the challenges of rapid organizational change with resilience and agility; and 4) harness their intellect and energy to solve global issues.

In Chapter 1, readers learn about the origins of the 4th Evolution, two leadership paradigms that were preeminent during the 20th Century—the Power Paradigm and People Paradigm. These paradigms paved the way for the 4th Evolution, Collaboration. Readers are introduced to a systems model that will help them understand the interactive elements of how an organization works. They learn that leadership paradigms are responsive to their time in history, that anomalies arise, and that these paradigms must shift. They learn that the assumptions, values, and beliefs of the Industrial Age’s Power Paradigm undervalued the humanity and needs of the workforce. This led to the emergence of the 2nd Evolution of leadership, the People Paradigm, which recognized that people were social beings who needed to be respected and honored for their contributions. The stage is set for the 3rd Evolution of leadership.

Chapter 2 helps readers understand the critical role that culture plays in defining how people work with each other. Schein’s cultural DNA helps readers understand that culture drives behavior in organizations, and Cooke’s work proves there are three types of leadership cultures present in most organizations and that most people prefer to work collaboratively with each other. Based on this understanding of leadership culture, readers are then introduced to Stephen Covey’s 3rd Evolution leadership, the Principle Paradigm, and the cultural foundations of the 4th Evolution, the Collaboration Paradigm.

In Chapter 3, readers learn about the six key thought leaders who helped shape the foundations of the Collaboration Paradigm, from McGregor to Senge. They then explore the components of the Collaboration Systems model other than culture, to fill out what a collaborative organization looks like: leadership, business processes, and people processes, and organization design. In this light, the Collaboration Paradigm is defined, addressing some misconceptions about this commonly used term. With all four evolutions described, readers are then challenged to consider what it takes to become a collaborative leader.

Chapters 4 and 5 speak first to what Collaborative Leadership is, including its beliefs and principles, attributes and behaviors, and the 10 key roles that collaborative leaders play in an organization. Given this comprehensive understanding of collaborative leadership, readers are then asked to consider going on their own journey to become this kind of leader. They come to understand who may and may not want to become collaborative leader, and if they choose to do so, what is involved in the process. A 10-step journey is outlined in detail and readers have an opportunity to explore who they are as future leaders through this process.

Having made the decision to go on a collaborative leadership journey, Chapter 6 helps readers understand the types of skills they will need to be effective in their new role. There are 17 key skills that are tied to the 7 Principles of the Collaborative Work Ethic, and in implementing these skills, readers can create a collaborative leadership culture. Whether it is in facilitating meetings or collaborative team development, giving and receiving feedback, or holding people accountable, practicing these skills helps create an empowering work culture where the workforce is psychologically safe, a place of trust, and where individuals and teams do high quality work.

Since organizations get their work done through teams, and teams are the drivers for change, in Chapter 7, readers learn about how we arrived at the 4th Evolution of teams, Collaborative Teams. They learn about the critical importance of psychological safety as a precondition for their creation. To do their best work, people need to feel physically, emotionally, and psychologically safe. Creating collaborative teams provides that safety, whether it is at the leadership, departmental, or project level. Because teams do their work through meetings, readers also learn how to design and facilitate a collaborative meeting. Finally, the idea of Culture-First is introduced to readers in terms of front-loading the development of their teams by using the seven-step Collaborative Team Governance Process. Of particular import is the discussion around obtaining 100% true consensus in decision-making.

With Chapter 10, readers are approaching the end of their journey and are challenged to see how their collaborative leadership abilities and skills can be applied to the solution of major global issues. Climate change, perhaps the most serious existential threat the world has ever faced, is considered in detail. The size, scope, scale, and impacts of climate change are described, followed by the challenge to global leadership to address it. While global leaders to date have failed to curb the increase in carbon-fueled global warming, tomorrow’s global leaders are challenged to commit to a Collaborative Leader’s Creed, which applies the principles of collaborative leadership to the solution of our most vexing problem.

Presenting a uniquely humanistic and scholarly approach to collaboration, Leadership’s 4th Evolution helps business administration students develop the critical people and leadership skills they need to become effective leaders and team members who can inspire transformational change within the workplace and the world.

If you’re interested in perusing the content of Leadership’s 4th Evolution for course use, request a digital review copy of the book.

If you’d like to use the text in your course or department, please contact us at adopt@cognella.com to discuss adoption details and pricing options with a Cognella adoption specialist.