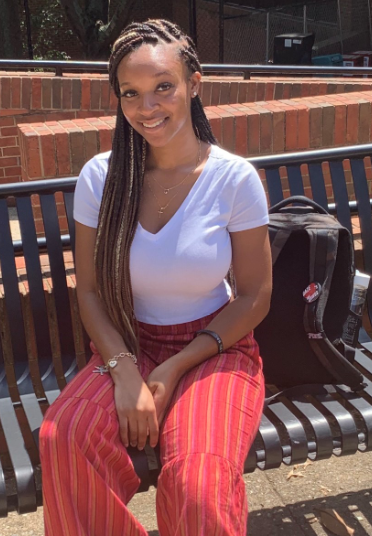 If It’s Worth It, It Won’t Be Easy

Filled with a mixture of excitement and exhaustion, I entered my mom’s Toyota Camry, ready to fill her in on my long day. I had just completed my last mandatory school science fair, and whether I advanced to the next round or not, I was just relieved that it was finally over. Still dolled up in my dress and curled hair from the day, I turned to my mom as she drove through the parking lot and onto Shiloh Road. Besides having competed in the science fair, this day seemed like any other day. Backroads were always my mom’s choice of routes back to home, so we turned down Leach Road to get to Garnett Way. Oddly, there was an unusual backup on the way back. My mom must have noticed the cause, because she suddenly took a right turn into a small cul-de-sac to turn around. Just as we were changing directions, I heard sirens, and noticed red and blue lights flashing in the rearview mirror. I did not understand what was going on. What did we do wrong? The next events would change my attitude on immigration in America forever. While I understand that our country’s security is a top priority, there are just one too many hoops to jump through to become American, which result in negative effects on many families.

At thirteen, I was displaced and separated from my mother after she was arrested and detained by immigration services during a routine traffic stop. This made me realize that our current pathway to citizenship continues to separate families through several factors that often hinder millions of applicants because they are subject to deportation while waiting. At present, there are only three avenues to become a legal immigrant: through work sponsorship, family sponsorship, or asylum. Each of these paths is incredibly hard for an average person from a foreign country to qualify for, and the disadvantages only grow from here. The length of time and amount of money that go into acquiring a visa are inconsiderate to families that come in, fleeing persecution or poverty in their home countries. Imagine even having to choose between your home and an unfamiliar land in order to survive or provide a better life for your family.

This decision does not come easily, and many immigrants don’t even realize the poverty they may face when they cross the border. On the other hand, many immigrants are aware of the cons of their decision, yet they still choose the latter because it is better than what they face at home. This decision should never go unnoticed, yet when immigration is brought up in the media, this sacrifice is the last thing mentioned.

This past semester in my public speaking class, I had the opportunity to perform a persuasive speech on this hot topic to a room full of white, American students. I took to the podium and chose to shed light on a prolonged issue: immigration in America and the pathway to citizenship. When I asked my classmates a seemingly simple geography question on the five U.S. territories, the majority of them could not get past Puerto Rico or the Virgin Islands. This question, among others that cover topics most United States students have learned since elementary school, is one of many that immigrants must answer on the U.S. Naturalization test. The fact that my classmates couldn’t answer this question correctly did not surprise me, but rather further explained the disadvantage that we as Americans place on other humans who simply come seeking the same opportunities upon which this country was founded on. Just back in 2018, an NBC News article conducted a survey on this test, and of the 1,000 participants, only 36 percent passed. How can we expect foreigners who have been in the States for just a few years to easily pass a 100-question test if less than half of natural citizens are capable of doing the same? Now, I had my classmates’ attention. The first step to seeking change is acknowledging a problem, and then putting yourself in someone else’s shoes to understand the problem.

At first, the goal of my speech was to persuade my classmates that there was a change needed in the first place to our immigration system, but I soon realized that before I could rally a group to fight for the same cause as me, I had to first inform them of what they did not know. When I was separated from my mother, I often felt like I had no one to talk to because the issue was hard for many of my age, or even adults, to comprehend. When detained, immigrants are placed in detention centers similar to jails, but as a holding place as they await trial for their case on deportation. It was not uncommon that when I would explain this, someone would assume my mother was in jail. I want to reverse this stigma that immigrants are automatically criminals just because they didn’t take all of the necessary steps needed to become a citizen when they first stepped onto this land. It is not that easy or simple.

A person must be 18 years of age at the time that he or she is filing for naturalization. Before this, however, he or she must be a lawfully admitted permanent resident of the U.S. for at least five years or three if filing under a spouse. Without this visa, as many call it, they face deportation, resulting in several undocumented immigrants living in fear every day. What many natural born citizens do not realize is that an immigrant does not just come to this country and ask for citizenship. There are steps that have even more steps within them before they can reach that end goal. The reward is marvelous and worth it for most families, but at what cost? I don’t know too many people who have experienced prolonged separation all in the hopes of experiencing the same freedoms and opportunities that we as Americans take for granted. Many more steps, such as demonstrating a good moral character, going through an interview process, and having the ability to read, write, and speak basic English, further the notion that this process could take years, or even decades for some to ever complete.

Upon my mother’s return home, it took countless court dates in the span of three years before she was finally granted her green card back in 2017. No, she wasn’t a danger to society, but rather a young woman who came to the U.S. on a student visa back in the ‘80s. Then she had some kids, and got caught up in this roller coaster called life that brought on unforeseen challenges she had to face on her own. The length of time for each step, expenses for lawyers and application fees, and the need for an advocate continue to hold back millions of immigrants from ever gaining citizenship. My mom is almost sixty, yet she was just recently granted permanent residence in a country she has lived in for over thirty years, with children born here who have never spent a day back in their motherland.

As a society, we often learn and understand more about those around us when we educate ourselves further. It’s almost selfish to require immigrants to know so much detailed information about the U.S., yet there are natural born citizens who don’t even understand process these same immigrants must take to reach “legal” status. Education is the greatest weapon, and one of the compelling factors for foreigners to seek this country as their new home. Creating a curriculum that includes this understanding for students at an early age is essential for any change in perspectives to come in the next generation. In terms of higher education, the ideas are endless. Not enough credit is given to first-generation college students right on campus, who may have personal experiences with this. The more we learn from others, the more our perspective will broaden.

Some people will never understand this struggle until they experience it, but it doesn’t have to come to this. While it was traumatizing at one point, I personally would not change the experience. After all, it gave me a perspective that not many people have today. With this background, I am better equipped to educate those around me with the tools needed to live cohesively with immigrants as they go through this process. It won’t always be easy, but it will be worth it.