Figure 2.4. The cochlear nerve is located in the inner ear.
Source: https://commons.wikimedia.org/wiki/File:Anatomy_of_the_Human_Ear_1_Intl.svg

Short alt text: An anatomical drawing of an ear with parts labeled.

Long alt text: The cochlear nerve is one of the innermost parts, extending further inward from the cochlea at the front of the inner ear.

Notice how we only describe positioning of the cochlear nerve, as that was mentioned in the caption and is the focus of the image. The caption and surrounding text will indicate if the full diagram needs to be described or only part.

Notice how we do not describe the physical appearance of the chart, as the importance is not in the structure but rather in that steps follow a sequence. 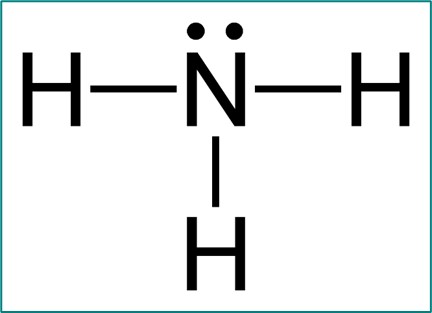 Long alt text: Three Hs are connected to a single N at the center with a double dot above the N.

Notice how we do not want to define what is meant by the symbols, as that would provide an advantage over students not relying on the alt text.